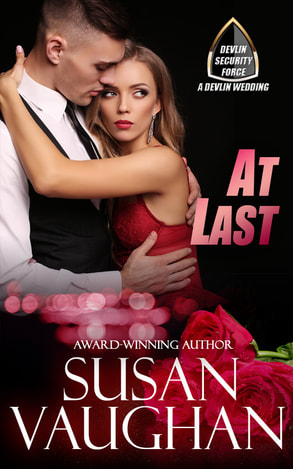 SPOILER ALERT - At Last winds up the Devlin series with a wedding, and also includes updates on other characters in the series.

​"A quick read filled with intrigue and plot twists and lots of sexy tension." - Amazon reviewer

"This was the perfect summer romance read...and because it was a short story, I could indulge my craving
for the happily ever after in one, lazy summer sitting. Now I want to read the rest of the Devlin series!" - Amazon reviewer
​
Digital​ & Print - Amazon
Print Only - Indiebound

When at last she’s ready to trust him with her heart … ​she learns he’s only there to protect her body.
Maid of honor Andie Devlin owes her life to her brother Thomas and his bride Cleo, and the least she can do is make sure their wedding is perfect.
A former wild child, Andie now keeps men at a distance. But Devlin Security Force’s sexiest operative Mike Pagano
seems set on spending the wedding weekend at her side. Andie longs to give in to the attraction that’s been sizzling between them for months,
but fears that this straight-arrow former Marine will judge her for her past. Just when she’s ready to take a chance on him,
she learns the real reason he’s stuck to her like glue—her brother charged him with protecting her.

Mike Pagano loves his DSF job—except when it forces him to lie to Andie.
Yes, he wants to keep her safe from the art theft ring suspected of planning an attack during the wedding.
More than that, he admires her for rising above her past, and he wants her in his arms and his bed.
Then Andie confronts him with what she’s overheard. Too late, he realizes he should have trusted her with the truth.
Now he must protect her only from a distance, unaware a gang member has infiltrated the wedding.

Mike and DSF must act fast to find the threat … but they may have a secret weapon of their own—Andie.

Excerpt from Chapter One