​DARK: An elite corps dedicated to preventing terrorism … and finding happily ever after
The DARK Files, Book 2​ 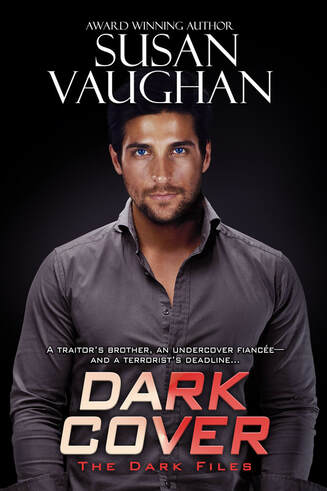 “What a skillfully written story of romance and suspenseful mystery...a powerful story …
where the characters are memorable and the plot speaks to the heart.” - CataRomance Reviews

​A traitor’s brother, an undercover fiancée—and a terrorist’s deadline…
Nick Markos has inherited the burden and shame of his brother’s dealings with terrorists, who demand he return the millions he skimmed.
Hoping to uncover a plotted attack, the Feds install DARK Officer Vanessa Wade undercover as Nick’s glamorous fiancée.
Despite her expertise, Vanessa has grown to dislike undercover work. Under orders to make sure the sexy and tortured tycoon is no traitor,
she soon realizes that instead he’s determined to regain his family honor—and his own. She tells herself to stay detached,
but this man’s kisses make her emotions spin out of control. As they work together amid gala social events and terror threats,
​Nick and Vanessa cannot deny their mutual attraction, but her deception makes Vanessa feel as false as the rock on her finger.
Is their relationship only a charade? One that could explode—along with a terrorist bomb?

Prologue
“YOU WILL RETURN the money your brother stole from us, or we will take action.”
“It’s three in the morning. Who the hell is this?” Nick Markos slammed down his half-empty glass. Glenfiddich splashed onto the mahogany desk that dominated one end of the library.
Damn. A waste of single malt Scotch.
He’d spent the day torn in two directions — running his own business long-distance and trying to sell another. Sleep eluded him this autumn night, but he had no patience for demands in the wee hours. He didn’t know the voice, but recognized the Middle Eastern accent and the menacing tone.
The quicksand of his brother’s dirty dealings was sucking him deeper and deeper. Would he ever be rid of the muck?
“My name is not important.” The sly smile in the man’s unctuous voice scraped Nick’s nerves. “Are you not the brother of Alexei Markos? The late Alexei Markos?”
Regrettably. Although they hadn’t spoken in years until Nick visited Alexei in the District of Columbia jail, he did regret his younger brother’s untimely death — for many reasons. This phone call among them.
“Who wants to know?”
“You are conducting his affairs at present?”
“If this is about business you had with my brother, call the office tomorrow. Markos Imports, on O Street. During business hours.”
The cordless headset at his ear, he paced the length of the library. Books on antiques, history, art and artifacts filled the floor-to-ceiling shelves. Their musty odor permeated the room.
He stopped at the modern globe in the Victorian oak stand. Though Alexei had lacked integrity, he’d known value and he’d had taste. Nick spun the globe, stopping it with his finger on a tiny Middle Eastern country — about as far from suburban Chevy Chase, Maryland, as you could imagine.
If, as he suspected, the caller was the leader of an ultra-extremist group from that land, no records of those transactions were in the office or anywhere else Nick had searched. His temporizing tactic would serve only as a chance for more information.
If he were given more luck than he’d had lately.
“Your brother conducted transactions for us, but he kept ten million dollars that is ours. It matters not where you get it.” The falsely pleasant tone vanished. His caller fired the words out hard and clipped, bullets. “You know who we are. It is not wise of you to feign ignorance, Mr. Markos.”
“Ignorance is all I have to offer.” Nick forged steel into his voice. “Alexei and I weren’t close. He didn’t confide in me. He left no money and no investments. Only debts, which will be paid as much as possible once his business and this house are sold. Get in line.”
He stalked back to the desk and downed the rest of his drink. The Scotch, smoky and rich, slid heat down his throat. He’d rather have savored it slowly.
Silence hung at the other end of the line. Would the bastard give up so easily? Not bloody likely.
“I see you do not yet understand the precariousness of your position. Your brother also thought he could cheat us and get away with it. Alas, the warrior sent into the jail to persuade him otherwise went too far.”
The meaning of the words chilled Nick’s bones. The D.C. jail was notoriously overcrowded and dangerous. A knife fight had broken out during a recreation period. After the scuffle, Alexei was found stabbed, although he hadn’t been anywhere near the two men fighting. The altercation made grim sense in light of the caller’s words.
Nick had hoped to settle his brother’s estate quickly and quietly and return to his business in London and New York. He wanted no breath of the scandal to reach their ailing father in Greece. The depths to which Alexei had sunk sickened him and steamed his blood.
But redeeming the family honor seemed impossible in the short run.
First Alexei had sullied the family name by dealing with these scum calling themselves New Dawn Warriors. To help them fill their war chest, he sold valuable imported art and artifacts. He murdered two people and tried to kill a third. Four jurisdictions charged him with crimes. Enmeshed in greed, Alexei stole from the extremists and had gotten himself killed. More than anything, Nick wished he could erase the whole sordid affair.
“Are you admitting to murder?”
He should’ve agreed to the wiretap suggested by the Homeland Security agency called DARK, but he’d hidden his head in the sand and denied the need.
The man barked a laugh. “I am merely saying that the few who cross the New Dawn Warriors often meet with unfortunate accidents. We are the chosen, the enlightened ones who will lead the way. No one thwarts our ordained path.”
“Sounds like a threat.” He fished through the desk drawer for the card from the DARK officer. “It won’t work because I don’t have your money. Goodbye.”
Nick was about to tap the disconnect button, but the caller’s next words stilled his finger.
“You have a fiancée, do you not?”
Danielle.
Nick’s throat closed.
Without waiting for a reply, the caller continued, “A lovely, flame-haired young woman, the Warrior in London said. You had your chance, Mr. Markos. Do not bother to meet her flight. She will not be on it. We will be in touch.”
A quiet click severed the connection.
NEWSLETTER SIGN-UP                CONTACT SUSAN            CONNECT on Facebook & Twitter