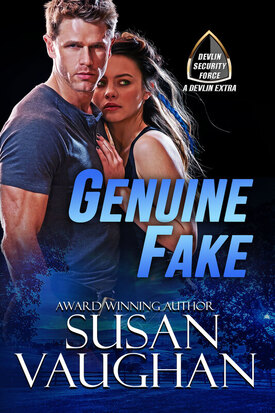 A Devlin Extra - Not in Sequence

His tragic past… Her guilty secret… Their only chance for redemption.
Devlin Security operative Boyd Kirby guards only art and artifacts. Memories of leading his Army Ranger team into a deathtrap haunt him,
so he swears never to protect people. But when the woman who once stole his heart asks for help, he can’t refuse.
The search for Gemma’s missing friend leads to a complex case of art forgery and murder attempts on her.
Sweating bullets, Boyd vows not to be distracted by her warmth and his desire. He damn well will protect her… with his life.
Gemma Bellini believes managing her famous grandfather’s art legacy can redeem her for a past scandal that makes her wary of men’s motives.
Because of forgeries linked to her friend and life-threatening incidents, she needs Boyd, who worked with her before.
She never forgot his sexy magnetism and wry sense of humor that masked pain.
This strong man will investigate and keep her safe, but can Gemma trust him with her heart and soul?
When sparks between them ignite to flames, the danger escalates—to their lives and their hearts.