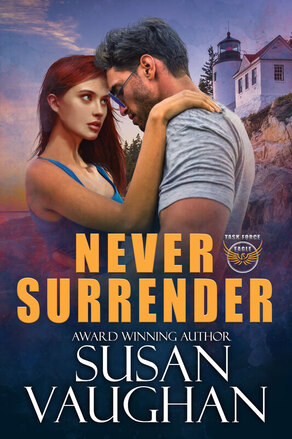 "... filled with action, suspense, romance and a
​number of sneaky little twists and turns."
​- FRESH FICTION

Digital & Print - Amazon
Print Only - Barnes & Noble
In hot pursuit -- For years, DEA Agent Ricardo Cruz has pursued El Águila, the gun-and-drug-smuggling
cartel that killed his older brother. When Rick finally has a lead in Maine, his suspect goes underground
and the sister refuses to cooperate. Beautiful Juliana Paris’s quick wit and loyalty draw him but he can’t afford involvement with his suspect’s sister.

With no way back -- Because Juliana’s father suffered injustice that led to his early death,
she intends to find her troubled younger brother and ensure the law treats him fairly.
She’s determined not to fall for the sexy agent, even if he is dedicated and honorable.
Threats by the cartel, who plan to use her to lure out her brother, force her to accept Rick’s protection.

The only choice is . . . surrender. -- Juliana wants no charmer like the men her mother keeps marrying, and Rick wants no strings.
Although attraction sparks between them, the two are at odds and their personalities are polar opposites﻿,
but they must work together while evading the thugs. Their hunt for the brother and the cartel’s
​American connection leads them into each other's arms and into deadly danger.

***Below the excerpt is a downloadable recipe for the Arroz con Pollo Rick makes for Juliana.

Three knocks rattled the apartment’s thin paneled door. He waited. If it was Wescott or Donovan, they’d call his name. He held his breath and gripped his nine millimeter.
The doorknob jiggled. A key clinked in the lock. Then the knob turned, and the door eased open.
In the spill of light into the room, he saw a gloved hand at the door’s edge. A hand holding a small automatic.
Before the intruder could make a move, Rick knocked away the pistol.
A sharp gasp of shock and surprise. Then the intruder slammed his chest with something hard, knocking the breath from his lungs. Before he recovered enough to get a good hold, the smaller man swung a kick.
Letting his thigh take the blow, Rick flipped his attacker and slammed on top of him. Darkness prevented a clear look. He jabbed his gun barrel at the guy’s throat. “Federal agent. Give it up, and you won’t get hurt.”
The intruder cocked his head in a careful nod.
Easing off his captive, Rick reached inside the unzipped coat to pat down for weapons. A wool sweater covered a slight torso with curves and soft, round . . . breasts.
What the hell?
As he lifted his gun from her throat and sat back on his heels, the woman dragged in a deep breath. “You . . . you,” she gasped, “Nazi bully. This is what I pay taxes for? To be crushed and then groped?”
At her outburst, his lips twitched with a smile. The kid’s girlfriend? An accomplice? She sounded irate, but not street tough.     He kept his gun on her and flicked the light switch.
In the glare of the bare overhead bulb, the woman blinked. She had a turned-up nose and wide mouth, lips clamped in displeasure. Her eyes shot green fire at him.
He leaned across her to retrieve her gun, but found instead a more innocuous item. Chagrinned, he handed her the small flashlight.
Beside the woman lay a voluminous purse. Her ramming weapon.
He quickly checked the contents. Wallet, zippered day planner, hairbrush, and various other female junk, but no weapons other than the leaden bag. “I expected to see bricks inside.”
“I wish.” Her chin shot up a notch. It was gently pointed, emphasizing the heart shape of her face.