Obsession, Two-Book Set
​Book 1
SCROLL DOWN FOR THE BOOK DESCRIPTION, RESEARCH PICTURES, THE BOOK TRAILER, AND AN EXCERPT.
​

Guiding a canoe party through the Maine wilderness is more than just a job for former Major-Leaguer Sam Kincaid.
After hitting rock-bottom, he needs to prove he can pull himself out of the bottle and succeed at something.
He can't let himself be distracted by an ambitious, obsessed female, even if she's sexy, witty and smart.

Investigative journalist and confirmed urbanite Annie Wylde embarks on the canoe trip to keep a promise
to her murdered friend and intends to use the outing to study her notes on the notorious killer called the Hunter.
She banters with Sam but rebuffs his advances, considering him just another egotistical jock.
But when Annie realizes the killer has followed her into the woods, she learns there's more to Sam than testosterone and dimples.

​And Sam faces the challenge of his life to keep Annie safe and defeat the Hunter. 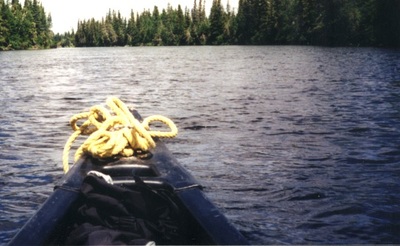 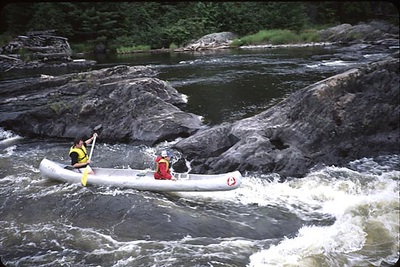 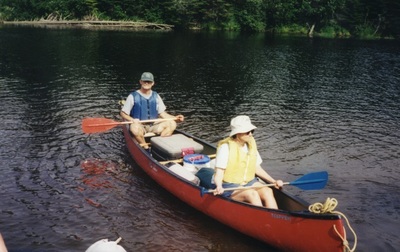 These pictures are from my research trip for this book--a canoe and camping trip on the East Branch of the Penobscot River in northern Maine. Long days paddling, even white water, and toting our food and our tents. So beautiful I scarcely felt my sore muscles. (Lie!)
​
The book trailer, below, includes the previous book cover, which had now been changed to coordinate with Hidden Obsession.


Annie Wylde clutched the small duffel containing Emma’s ashes. She stepped only on the sturdiest looking boards of the Moosewoods Resort & Safaris dock until she reached its end. Blinking away tears, she sucked in the clean July air.

Powerboats and a few sailboats scored the northern Maine lake’s surface. The longest one in the Northeast, Moosehead’s waters stretched blue and cool to the verdant wilderness.

Beside a float at the end of the dock, a white airplane with pontoons as large as rowboats rocked on a powerboat’s wake. Annie counted five side windows—a large enough puddle-jumper to transport her expedition to the woods.

“Not here, Emma,” she whispered. Emma’s mother had shared a few ounces of her daughter’s ashes for her to scatter in the outdoors Emma had loved so. “It’s too busy, too civilized for your taste. I’ll wait for the wilderness lake.”
They’d scheduled the canoe trip nearly a year ago, to help Annie overcome what her friend had called her nature phobia. Emma would have been in her glory. Six days canoeing and camping in the Maine wilderness. Campfires and hikes, sleeping in a tent. Bears and moose?

With a shudder, Annie turned away. She’d promised Emma, and here she was. True, nature usually had it in for her. Like the time she’d gone hiking with a bunch of college friends. Everyone made it across a hillside of loose shale—except her. When it was her turn, the underpinnings gave way and she slid all the way down the hill on her butt.
Then there was the time she and her brothers went skinny-dipping at Uncle Martin’s hunting cabin. She was the only one who contracted poison ivy—on what everyone else thought was a hilarious part of her anatomy.

Where she was concerned, Mother Nature kept score. This far north, water created from snow melt would numb her feet up to her ankles as soon as she stuck a toe in. She examined the coral polish on her manicured fingernails. Already a nick.

But she had to do this. A grooming hazard was minor compared to people’s lives.
Compared to Emma’s life.

After the horrors her friend must have experienced, a canoe trip to sprinkle her ashes was the least she could do. The first of two promises she’d vowed on Emma’s grave.

“Did you see this headline?” her brother Thomas said. “This is today’s Portland Messenger.” He deposited Annie’s sleeping bag on the dock.

The screaming headline slapped Annie back a step. “The bastard’s killed another one. When will it end?”

This was the fifth victim attributed to the same killer. Another woman tortured and buried in the woods. She squinted against the morning sun’s glare on the glassy lake.

“Going on a canoe trip is insane, Annie.” Thomas Wylde smoothed the crease in the newspaper. “You hate nature. Why give up your byline?”

She shook her head. “You don’t get it. The byline doesn’t matter. I promised.” And she preferred a canoe expedition to a safe house. Since the Hunter—or some sicko faking it—had started telephoning her, the police had insisted on protection.

She gave her brother a sideways glare. He looked so strong and confident in his Maine Warden Service greens, but he didn’t understand. Still, he ought to appreciate how the murders had affected her. She adjusted her pink cap, tucking her ponytail through the slot.

“Hey, ease up,” he continued. “You can’t do everything. Let the cops solve it. Justin’s starting to think you don’t believe his office can handle the case. Didn’t he say they consulted an FBI profiler?” He folded the newspaper section and tucked it in the back pocket of his uniform trousers.

“The cops are doing a fine job, but that’s not the point.” They didn’t—couldn’t—care as much as she did. They hadn’t personally known one of the Hunter’s victims.

“Just what is the point? You trying to read this killer’s mind by skulking about in the woods?” Thomas punched a finger toward the evergreen-spiked hills.

“Why not? How can I begin to understand where the Hunter’s coming from without experiencing his affinity for wilderness?” She knew more about the Hunter than anyone except the cops. “If I can achieve some empathy, that’ll be a step toward identifying the monster.”

That was her second promise, using her notes and insights to help identify the killer. Apprehension and grief vising her chest, she inhaled a deep breath to firm her resolve.

“Okay, but don’t blame me if you need bandaging after a week in a canoe and a tent.”

She sighed. He was right but she could take it. She could. “When in the blue-eyed world will you stop treating me like the baby of the family? I am nearly thirty.”

“And you do need a vacation.” Thomas, the oldest in the family, made definitive statements. He didn’t suppose.
Before she could protest the implication that an obsession with the Hunter was affecting her sanity, another voice interrupted.

“Sure she does. We know how much our baby sister appreciates us caring about her, don’t we?” A grinning Justin Wylde, in khaki slacks, a denim shirt, and one of his favorite Looney Tunes ties, dumped Annie’s sunflower-yellow duffel on the dock beside her bedroll. “I doubt the mosquitoes will be impressed at the jazzy luggage. Dad’s still spoiling his baby.”

“Not this time. I paid for all this stuff myself.” She hated when they treated her like she was fifteen. She didn’t add that the expense had maxed out her Visa. After all, she needed waterproof stuff. “Be careful with that.”
“What do you have in here, ten pairs of shoes and a battery-powered hairdryer?” Justin pushed his aviator sunglasses onto his forehead.

They thought they knew her so well. “No, Detective Wylde. Your sleuthing nose is clogged. My duffel contains only the footwear specified on the list—rafting sandals and sneakers.” And her tablet and two extra, charged battery packs. Plus a few other essentials.

“You’ll like it out in the fresh air with the moose.” Justin chuckled.

“You two can’t frighten me.” Much. “I may be heading into the wilderness,” she said, browsing the brochure, “but the expedition is fully guided with all meals provided. The campers are expected to help. I don’t mind pitching in.”

Justin slid his sunglasses over his eyes. “You have to sleep in a tent. On the ground.”

“A firm bed is good for the back.” She hoped. “You’re the one who urged me to go. Having second thoughts?”

“Just want to be sure you’re ready for a chuck-wagon chef and no caffè latte, sis.”

“All I have to do all day is paddle a few miles and then relax on a beach with a glass of Chardonnay. But gourmet cooking by a Maine Guide—a backwoods geezer in a checked shirt and red suspenders? I don’t think so.”

Thomas hooked his thumbs in his belt loops and rocked back on the heels of his boots. “Don’t be too quick to judge. Maine Guides are famous the world over for their outdoor expertise. That includes cooking over a campfire.”
Interesting, a defensive tone and flushed cheeks. “No, don’t tell me.”

“Yup, a Registered Maine Guide. Official. Certified for recreational and fishing trips. Seemed a natural extension of my game warden job.” His chest puffed out.

"I have no worry. The brochure says gourmet cooking, so they must provide a chef."

Two men in their thirties lugged duffels toward her. More campers. Neither looked as if he knew Cordon Bleu from bluegrass.

So where was this intrepid Maine Guide?
***
“You worry too much, bro,” Sam Kincaid said. He polished off his third cup of coffee, then deposited the mug on the desk. Tucking packets of crackers and cookies in his shorts pockets, he headed for the Moosewoods Resort office door. “A little bushwhacking and paddling with the flatlanders will suit me better than rehab in the Minors. I updated my certifications. I know the territory. I have the food stocked and the activities planned.”

If only he believed what his mouth spewed.

“I have ten other activities I can schedule you to lead. Fly casting lessons. Kayak safety.” Ben Kincaid cast a skeptical eye at his brother. “I can send one of the other guides. Maybe Dad.”

Sam scowled even more. He hooked the clipboard with its client forms from Ben’s hand. “I’m not so over the hill that I’ll turn it over to the old man. The bases are loaded. Two outs and a full count. I gotta hit this pitch. I won’t screw it up. I left the Johnny Walker back in Boston.” He extended his left hand palm down to demonstrate his steadiness.

Ben’s clapped a hand on Sam’s shoulder. “Go for it then. I wanted you to be sure.”

Sam suppressed a sigh of relief as they exited the resort’s office.

A short gravel path led them to the dock. “Whoa, Nellie! Who’s the hot brunette in the bubblegum-pink hat?” Lush lips, mink-brown hair and curves that wouldn’t quit. Hot was right. Sam’s temperature climbed like an ace’s salary.

“Whoa is right.” Ben stopped his brother in his tracks by shoving the clipboard against his chest. “Remember their safety’s in your hands. Don’t let your hormones get in the way or land us a lawsuit. Even if it might undermine your rep as a major-league stud.”

Sam mentally kicked himself. “Hell. You’re right. Ethical lapse. Won’t happen again.” Too bad. A few bouts of steamy sex would chase down the solid sleep that currently eluded him. Creature comforts, sex among them, were high on his list of priorities, but leading a successful expedition had to come first. He wouldn’t, couldn’t let a leggy brunette distract him from that goal.
NEWSLETTER SIGN-UP                CONTACT SUSAN            CONNECT on Facebook & Twitter