DARK: An elite corps dedicated to preventing terrorism … and finding happily ever after
The DARK Files, Book 3 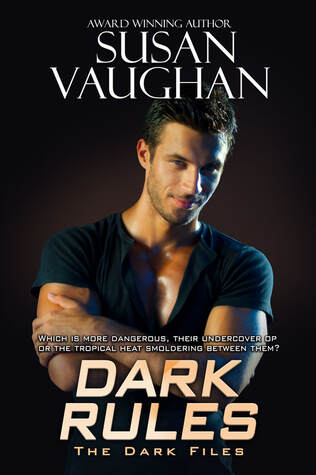 Revised & updated. First published as
Breaking All the Rules
Daphne du Maurier Award of Excellence Finalist
​
"Danger, secrets, lies, and romance are all evident in DARK RULES. Simon is the perfect hero,
albeit a bit overprotective at times, and Janna is the perfect heroine.
A woman who's been through much and turned out stronger for it. Grab your copy ... today."
- Romance Reviews Today
​
“An outstanding love story, another superior example of Ms. Vaughan’s ability to create genuine characters
with whom the reader can relate. A tension-filled story where emotions and danger often collide.” – Cataromance Reviews

Danger, secrets and lies…
Maverick DARK officer Simon Byrne, undercover on a Caribbean island, must stop an international arms dealer’s sale of uranium
that could trigger a world war. Simon’s mission goes sideways when the woman he once failed to protect
is assigned as his tech officer. Vowing to keep her safe, he fights the smoldering heat between them
because distraction could cost their lives. But despite his personal rule of no entanglements, she’s in his head…and in his heart.
By-the-book Janna Harris is determined to prove herself in the field and uncover whether her late husband,
who sold to the arms dealer, also betrayed his government. A treason investigation could expose
Janna’s own secrets. Her attraction to Simon wars with her pledge never to allow another man into her life.
But can she walk away from the only man who could heal her battered soul?
Emotions and danger collide as the powder-keg deadline ticks down on their mission—and their survival.